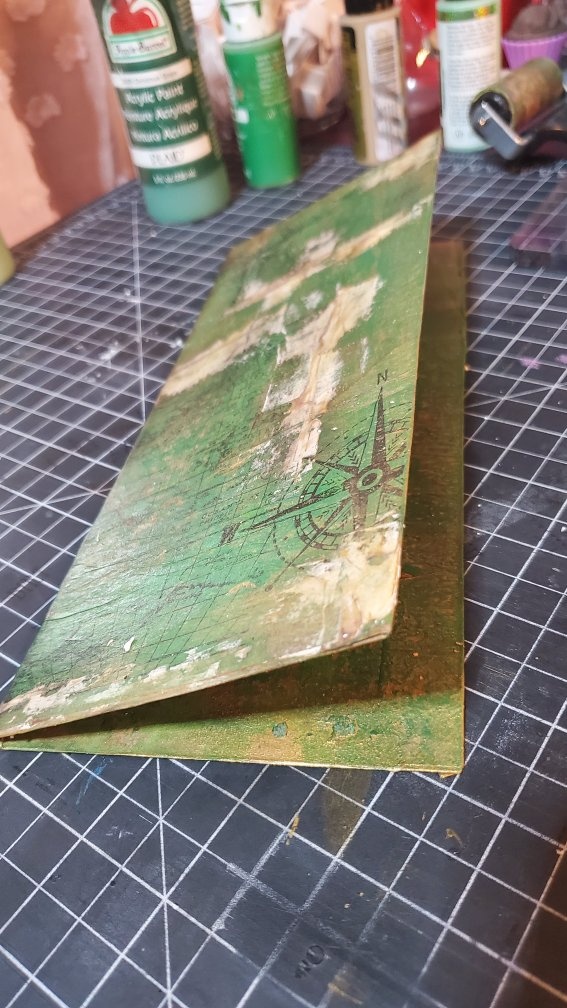 Here is a travel journal that was cooked up from prompts picked by my daughter. She sure knows how to pick them. There are two videos out there for this journal and there I explain how this came about. The colors she picked were green and gold. The craft type was travel journal.

What better way to create a journal!! I love using green and gold in crafts. The first thing I thought about were my trips to Germany and maps. I used a map stamp that was gifted to me, one of the Bo Bunny stamps, packing paper, a ceral box, and some texture paste. The journal is complete. I thought about decorating it this week, but I’m not big on journal decorating. I really need to learn how.

Like Loading...
Category: Patreon Posts
Tags: bakers and crafters, handmade by thelisha, journals
Join us on Patreon to see this content!
To view this content, you must be a member of WBCM Patreon Patreon at $1 or more

This is one of those moments where I think about Mrs. Sonya’s blog challenge all month, come up with 100 different ideas and take a piece from each one. As much as I don’t like waiting until the end of the month, I find that I put out the best stuff at that time.

So here we are with a beach theme. If you check out Mrs. Sonya’s blog on WordPress at Multimedia Crafts Digital, you can find the list for the entire year. I am so proud of myself because I’m still going strong.

With anxiety and all the stuff that’s been going on for the last 3 or so years, I learned a lot of lessons. This and my previous two posts really put it out there. I’m not one for getting personal with the world, but I only put it out there because I know I’m not the only one.

Before I get too deep, the quote will tell it all.

Free your ocean of plastic and embrace the driftwood.

I’m gonna leave y’all with that and the videos. Love y’all! ❤️ 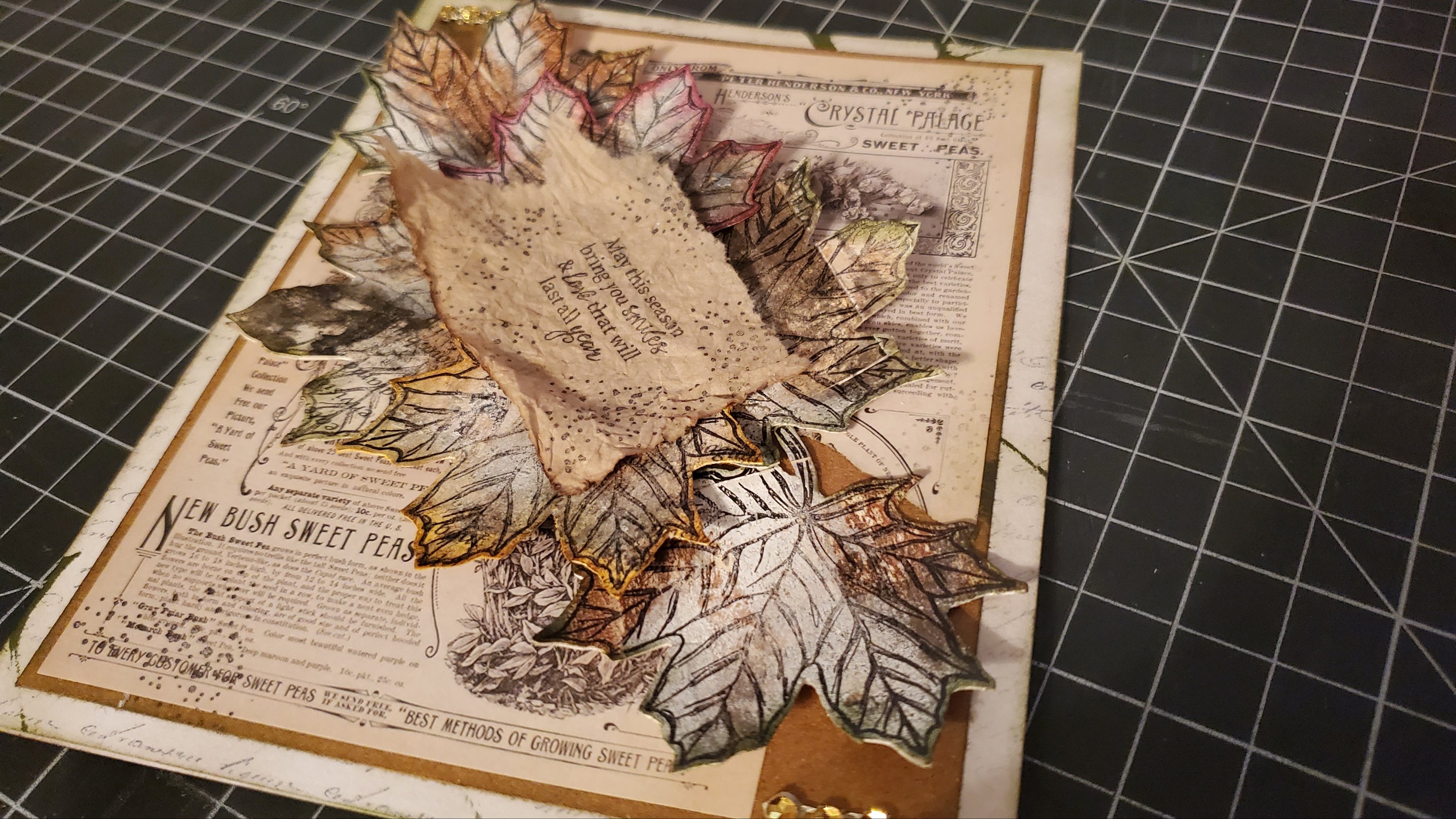 Here’s part two of the small craft haul. This is the project post. I made a greeting card that I love. For anyone that knows me, I’m not the greeting card type. I truly don’t like making them, but damn, I’m good at it.

I wanted to dive deep into using everything and doing more than one project, but it took me an hour to pump this one out. That’s made with time and love. I did use a Stampin’ Up! stamp set and their inks, but that’s because I couldn’t bring myself to extra overthinking and make something I wanted to throw away. If you would like the inks or the Gather Together stamp set (if it’s still available. I have had this for a while), check out one of my crafty friends below. They’re all demonstrators and are some of the sweetest people alive. The links below are to their YouTube channels where you can find all the rest of their information.

I will make more videos using the stuff from the haul. Y’all know how I like my clusters and layered ephemera. Be on the lookout for those project videos.

Here are the links to the products from the haul:

I know it’s been a long while. I haven’t posted to my blog since July 26 or something like that. There has been so much going on between that time and now. If you want to know what’s been going on with me, check out the video below. But anyway, let’s get down to it.

I put together a project using my Breakfast Time digital. I made a cookbook with the most cooked breakfast items in my kitchen. There are a few tips in there as well. Some may be surprised that waffles aren’t on the list. I cook waffles, but for the number of waffles I need to cook, having two waffle irons isn’t enough. I will say, the pancake recipe in this book can be used as a waffle batter too. So hey, whoever this goes to didn’t completely miss out. I would love to get one of those waffle irons that you put the batter on one side and flip it to do the same on the other side. The thing is, I don’t have anywhere to put it. That would require letting go of some gadgets that I’m not ready to part ways with yet. I’m a baker as y’all know, so a lot of my gadgets are very much useful.

I had so much fun putting this together. The Breakfast Time digital started out with pancakes. I’ve been trying to draw some decent-looking pancakes for over a year now with no success. I was sitting with my daughter one night and asked her what should I draw. She said pancakes… Yeah, she took it there. So you know I had to make her proud. She already thinks I can fix and do everything. She thinks I know everything. Even after telling her and the boys that I am not a magician, a superhero, or a genius multiple times. Not to disappoint, I took it the extra mile and drew bacon, maple syrup, eggs, orange juice, and bread.

What I used in this project:

This cookbook will go up for sale in my store. At this time, there will only be one, but if you’d like to request one, let me know. I hope you enjoy the video, the post, and the story behind the digital. Thank you for stopping by and I’ll see you in the next one.

*Disclosure: I only recommend products I use or have used in the past. This post contains affiliate links, that at no cost to you, pay me a small commission. 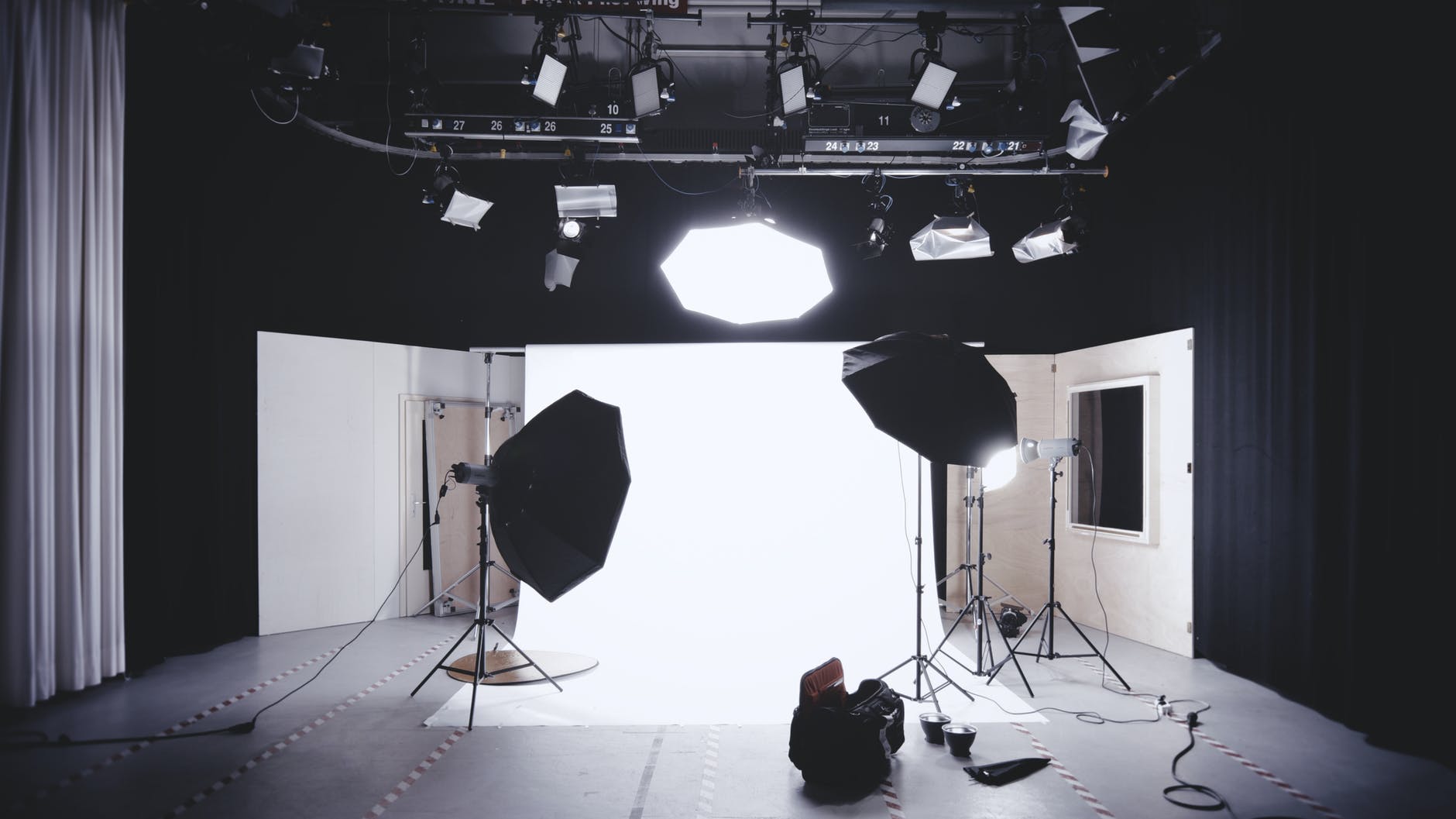 Over the last year, I received a few requests and suggestions about showing my face. I had it in my mind that I didn’t need to show my face because I’m a crafter, and the point of my videos is to show what I was making and not how I look. Do you agree? Some creators show their faces before their videos start and even throughout them, but that’s not me.

If I decide to show my face on camera, it will only be for my Bronze, Silver, and Gold Patrons. It won’t be just a general conversation type live/video; we will connect like friends, getting to know each other.

All Bronze and above patrons can access private videos and live sessions. I will have giveaways and contests for participants.

Have a great day!

Like Loading...
Category: All About Neatsuites
Tags: bakers and crafters, Be Strong, Be You, handmade by thelisha, patreon

Today, I’m going to share 10 tips for baking success. Even the best of us think we know what we’re doing since we’ve been baking for a long time. Then we try something new and mess it up. We’ve all been there. But this isn’t for our more experienced bakers. We know better, but we have our moments. When going through the list of tips, I will put myself on blast with some of the mistakes I’ve made from a beginning baker, all the way up until now. Here are the 10 tips for baking success.

There is much more to learn about baking, but until you get through the basics and can get the simplest things down, there’s no graduating, whether you’re self-taught or going to school. I’m a self-taught baker. I watched my mom bake and even helped sometimes, but I didn’t think about baking deeply at a young age. In my 20’s I started leaving the boxed cakes alone and doing my own thing. Experiment and failing, experimenting and succeeding. No one taught me how to handle the dough or know when it’s right. No one taught me to know when my cake mix was mixed right or how to build a cake. There were things I learned by watching people and there were things I learned on my own. However you go about it, make sure you go about it the right way.

I hope you enjoyed this post. If you would like to read more about baking, make sure you subscribe to the blog, let me know in the comments, and come back. See you in the next one.

Like Loading...
Categories: All About Neatsuites, Thelisha Bakes
Tags: 10 baking tips for success, bakers and crafters, baking tips, how to, the sweets by thelisha

Before placing an order, please read our Policies and Products & Shipping FAQ's Dismiss